Monday, 20 May 2019 / Published in Logistic, Uncategorized

It sure seems that Scott Woodrome of FedEx Freight has figured out the key to winning. It starts with his faith in God, adds a full dose of love and support from his wife, Lorraine, and the FedEx team, and tops it off with a diligent work ethic that gets him competition-ready.

The awards and accolades continue. Woodrome earned his fourth Grand Champion title at the Ohio Truck Driving Championships on May 18, in Sandusky.

When asked how he was feeling after the big win, he replied, “I am overwhelmed,” followed by a big smile and long pause. “I give everything to God, he has helped me thrive.”

Woodrome was young when he got started in the industry. The son of two educators, it was a tough sell when he told them his plans to be a driver. “I had a knot in my throat, the one where it is hard to speak,” he said. College wasn’t for Woodrome, but he was concerned the career path of being a driver would disappoint his parents. That did not last, as Woodrome said they become some of his biggest supporters.

Anyone who has meet him can attest to his professionalism. Decked out in FedEx apparel from head to toe for his pre-trip inspection test, Woodrome showed he meant business. The level of professionalism he exhibits goes back to when he got his start as a driver.

Woodrome performing his pre-trip inspection on a Twin trailer set-up. This is his first year competing in the Twins division. (Marissa Gamache/Transport Topics)

Falcon Transport was his first job. The company had two types of gigs for drivers, one in which the drivers were out chaining down and strapping loads and another that involved less manual load work. Woodrome was commonly mistaken for being a part of the latter, due to his crisp appearance.

Presenting a positive image of the industry started then.

“You can still wash your hands; there is no law against that,” Woodrome said.

With the help and support of family, friends and faith, he has been able to travel the country promoting the industry’s image and sharing the importance of truck safety. “You don’t get there by accident,” he said. “I have had so much support.”

Many hours are put in preparing for competition, studying the “Facts for Drivers” book, finding friends and coworkers to set up pre-trip inspections and taking a couple of spins around a mock course.

“Is sticking your head in a tire a lot of fun? No, but you have to practice,” Woodrome said.

Woodrome believes there is nothing that can’t be accomplished with practice and dedication. “In my eyes, you were always a natural champion, but now you have the tools,” he said.

During his normal city route, he drives a 4-Axle tractor-trailer. This year, he competed in the Twins division, a first for him and much different than the Tank division he won last year. “The enormity of equipment means a lot of touching and checking,” he said. 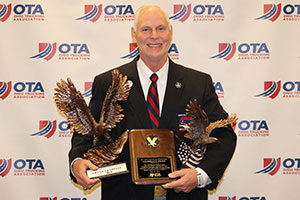 Twins pre-check went well — he received the chairman’s award for the highest pre-trip and written test score combined. It is an award that has evaded him during his 14 consecutive years of winning a title in Ohio and qualifying for the National Truck Driving Championships.

Woodrome’s wife is his biggest supporter. As he lined up for award photos, Lorraine looked on, snapping photos on her cellphone.

“Having her here makes the win so much more complete,” he said.

Woodrome attributes his success to the multitude of people who have had faith in him and supported his journey.

“I can’t thank FedEx enough, and my family and friends; it’s not just me on my own sailboat,” he said.

With this win under his belt, Woodrome advances to nationals in Pittsburgh on Aug. 14-17. He will be going for his fourth national crown, having clinched division titles in 2015 and 2017 and a national Grand Champion title while winning Tank Truck last year.

Eight other drivers will join Woodrome at NTDC, some heading back a second or third time, while others will be attending for the first.

UPS to Hold Holiday Hiring Steady at About 100,000

Nissan Appoints Head of China Business to Be New CEO